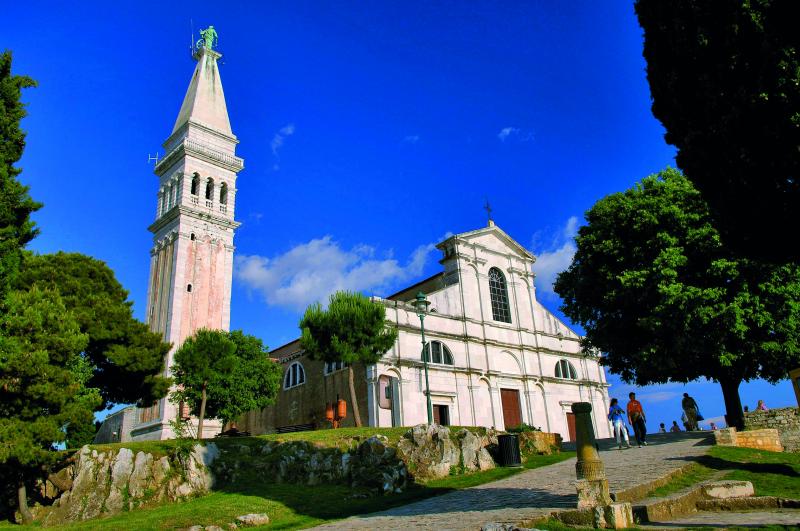 In the first centuries of Rovinj’s development, there was a small single-nave church dedicated to St. George on the site of the present church. In its vicinity there were three churches of St. Ursula, St. Roch, and St. Michael. In the mid-10th century, after the St. Euphemia’s sarcophagus miraculously floated onto the shore of Rovinj, the new three-nave church was built and dedicated to her. Since the mid-17th century, the great economic development imposed the need for a new and larger church. On 8 December 1720, after many years of preparation and demolition of the aforementioned neighbouring churches, began the reconstruction of the church according to the design of the Venetian architect, Giovanni Scalfarotta (1700-1764). The construction was resumed by another architect, Giovanni Dozza, who brought it to its completion in 1736. The new co-church became renowned ("insignis") on 11 September 1747, and the solemn dedication followed on 26 September 1756. This new building is the most important example of the Istrian coastal Baroque architecture. It dominates Rovinj historic centre with its impressive dimensions (length 51.11 m; width 30.26, height of the central nave 17.71 m and lateral naves 10.11m) and the bell tower.

In 1780, the south façade was partly covered with stone according to the design of Rovinj architect Simone Battisitella (Rovinj, 1726-1799). There is a copy of the Gothic bas-relief depicting St. Euphemia holding a model of the town by the front door (the original is kept on the wall of the St. Euphemia presbytery). The new façade was made according to the design of Rovinj architect Giacomo Depozza. As we learn from the inscription on the lintel above the main the doors (DEUS QUI OPERATUR AND SUIS // HAEC OMNIA IPSE IPSE INCEPIT PERFECIT - 1861), the façade was built from 1861 to 1865. The acrostics on the lintels above the side doors of the Blessed Sacrament and St. Euphemia included the dates of their construction (15 July 1733, and 2 February 1732). The acrostic on the lintel above the south façade doors (erected in 1733) was placed by the municipality that had the patronage of the church. The interior space is dominated by two sets of six arcades and five pillars, dividing it into three naves, of which the central is higher, as well as three beautiful detached altars. The motif of the arcades and pilasters is repeated on the perimeter walls with four altars on each side. The symmetric disposition of the arcades and pillars, longitudinal orientation towards the altars and grey colour of the stone material give the interior a special Baroque dynamism and emotion. The main and side altars (of the Blessed Sacrament and St. Euphemia) were made by Venetian master Giacomo Laureato (17th -18th century) in the period from 1739 until 1741, while the statues of St. George (in the middle, with a dragon), St. Mark (on the left, with the lion) and St. Roch (on the right, with the dog) on the main altar, and the statues of angels on the altar of St. Euphemia, are the work of master sculptor Alvise Tagliapietra (Venice, 1670 -1747) and his son Ambrogio. The statues of angels on the altar of the Blessed Sacrament were made by sculptor Giovanni Marchiori (Venice, 1696-1778). The walls of the choir behind the main altar are decorated by three large paintings that used to adorn the old Rovinj parish church. Paintings were returned to the church in 2013 after many years of restoration at the Croatian Conservation Institute. Traditionally, these paintings are attributed to Pietro Pergolis from Florence who came to Rovinj in the late 16th century.

The Last Supper, dating from 1574, shows the influence of Tizian and Jacopo Bassano. Prayer on the Mount of Olives and Sleeping disciples, which author was inspired mainly by the work of Jacopo Tintoretto for the Brotherhood of St. Roch (in Venice), are two connected scenes that had originally covered the wall surface between the arches of the church. In the niche of the altar of the Blessed Sacrament is a tabernacle in the form of ‘tempietto’ with silver doors. In 1777, the namesake brotherhood commissioned a sumptuous embossed silver antependium which was made for this altar by jeweller Angelo Scarabello (Este, 1712-Venice, 1795), which is one of the masterpieces of the Venetian late Baroque goldsmiths. The central scene, knurled with gold, shows the Supper at Emmaus. Side allegorical figures in poured and gilded silver, depicting Faith and Charity as virtues, are of great importance. On the altar of St. Euphemia is a significant stone gilded and painted statue (15th century) and behind, in its choir, is a sarcophagus with the body and the relics of St. Euphemia from Proconese marble made in Aquileia (approx III-IV century AD). The Saint's body can be seen through the small window on the sarcophagus. Her face is covered with a wax mask made by artist Mila Vod (Budapest, 1888-Zagreb, 1968) in 1953. The left arm is missing which, according to the legend, was kept by the Venetians at the church of St. Kancian after the Genoese had returned the relics taken from the Istrian churches during the Genoese-Venetian War (1378-1381). All the ceilings (including the seats of the main choir) were made by Giovanni Berengo called "Napolachi" from Venice until 1750, while stucco work ceilings are attributed to Giovanni Lattuga, also from Venice. Decorations of the choir and the presbytery of the side altars from 1883 are the work of Leonardo Riga from Udine and Giovanni Bino (1829-1914) from Trieste.

The side altars are also rich in artwork. In the north nave, starting from the sacristy, we find the following sequence of altars: - The Altar of Our Lady of Mount Carmel (her statue is attributed to the workshop of Alvise Tagliapietra); - The Altar of St. Nicholas (the statue of Titular is the work of Alvise Tagliapietra and his son Giuseppe); - The Baptismal Font (from 1737); - The Altar of St. Sebastian (altarpiece from 1635 by the unknown Venetian late mannerist author, showing Titular and the Virgin); - The Altar of St. Roch (altarpiece of Trevisano from Vodnjan / 1797-1871 / from 1832, is a copy of the older one from the 18th century which author was allegedly Jacopo Marieschi /Venezia, 1711-1794/) On the other side of the presbytery we find as follows: - The Altar of the Holy Rosary with the 19th century painting by A. Valerio of Venice; - The Altar of St. Francis of Assisi (renovated in 1779 according to the design of Giovanni Mattiuzzi of Udine) whose altarpiece, the work of Giambattista Mengardi of Padua (1738-1796), depicts the Titular; - The south doors of the church; - The Altar of St. Peter (renovated in 1779; the antependium is attributed to the workshop of Alvise Tagliapietra) with an altarpiece from the 19th century, the work of Francesco Grandi from Rome; and - The Altar of St. Michael the Archangel with a beautiful stone antependium - attributed to the workshop of Alvise Tagliapietra; the 1747 altarpiece depicts the Titular, Our Lady of Loreto and the Four Crowned saints showing the influence of the early works of Jacopo Guarana (Verona, 1720-Venice, 1808). The church and the sacristy are rich in other sculptures such as the pulpit of the central nave, the stoup at the entrance dating from 1782 with statuettes of St. Euphemia and St. George, etc. It is also abundant in paintings (and icons), religious objects and vestments, inscriptions and coats of arms, tombs, flags and, in particular, silverware although a large portion was taken by the French government in 1806. Above the main entrance to the church is the pipe organ built in 1754 in the beautiful and large, recently restored, closet. The organ is the only one by master organist Antonio Barbini (18th century) of Murano that has kept most of its original structure, and is a valuable cultural and historical monument.

The bell tower of St. Euphemia

On 7 October 1654, the construction of the new bell tower according to the design of Milanese architect Alessandro Manopola started on the site where a small ruined bell tower had stood since the ancient times. The construction was later continued by other Milanese architects, while Cristoforo Bellan, also from Milan, brought it to its end in 1687. Its architectural lines, distinct vertical swing, beautiful loggia for bells (about to 2/3 of its height which is approx 58 m), the upper balustrade, and a pointed tip, are typical for the Venetian bell towers and it is one of the most beautiful in Istria. A large statue of the Saint (4.70 m high), made in copper plates in the workshop of the Vallani brothers of Maniago, was set on the top of the bell tower on 11 June 1758 replacing the old one which had been destroyed by lightning. The statue is placed on a shaft and rotates with the wind, according to the design by Simone Battistella (Rovinj, 1726 to 1799). In 1993, it was pulled down from the tower to be fully restored. From the ancient historical Venetian bells cast in 1794 in the Venetian workshop of the Canciani family, only one large bell has been preserved and is kept in the church. Today's three bells were manufactured at the Innsbruck foundry from 1994 to 1995.