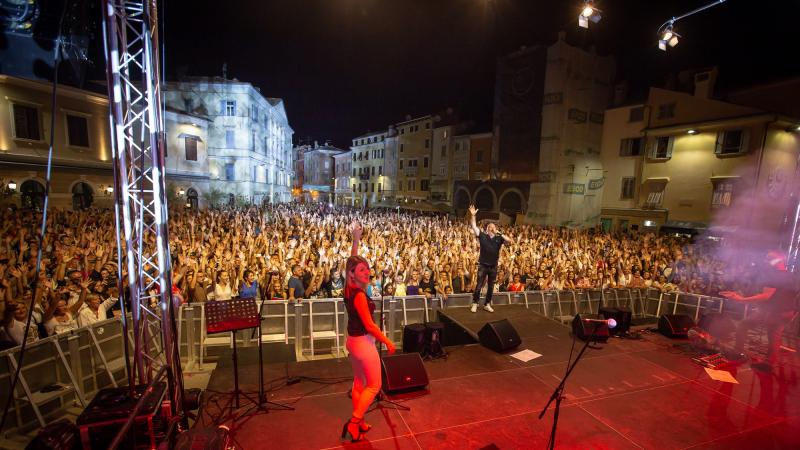 Another Rovinj Night, a traditional entertainment event with a long tradition that has been organized for over 55 years by the Town of Rovinj-Rovigno Tourist Board and sponsored by the Town of Rovinj-Rovigno, was held. This year, an attractive music program was prepared for the citizens of Rovinj and their guests, a kind of musical treat for music lovers on the town’s promenade.

The Rovinj Night entertainment program started on Friday 30 August at 20:30 with a performance by the Brass Band and Rovinj Majorettes along the Rovinj waterfront. The entertaining program on the main town square started at 21:30 with the performance of Simon Marlow and The Rovinj Music Lab, followed by choreographies by Dance Lab Creations. Eleonora & Luka band performed from 21:30 in the Riviera Square.

The next day, 31 August (Saturday), the program continued at 19:30 with performances by the Roxanne Dance Group in the Carera Street, along the waterfront of Rovinj, to the plateau of St. Euphemia. The entertainment program started at 21:30 by the performance of the Party band in the main town square, while Ivana Galić band and Master band performed in the Riviera Square.

A traditional spectacular 15-minute fireworks show started at 23:00 hours. After the fireworks, the program continued with a concert by Toni Cetinski that lasted long into the night.

The entertaining program was accompanied by a rich gastronomic offer organized by Maistra, the Agrorovinj Association and the Batana House.

The event was sponsored by Coca Cola and Zagrebačka banka.