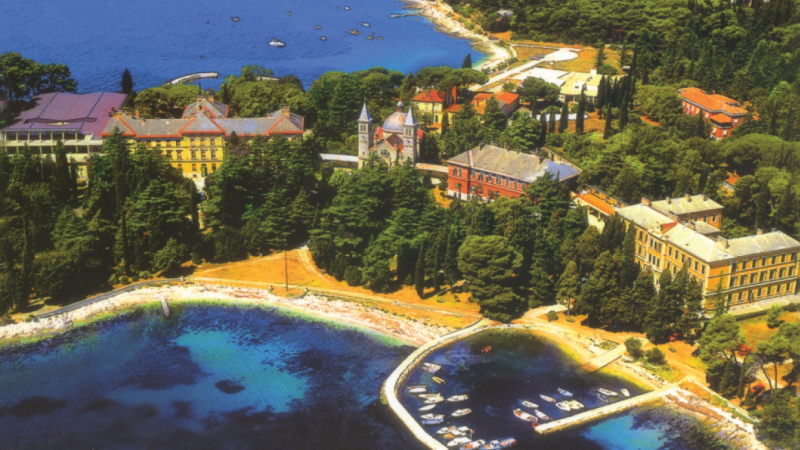 The development of tourism as a social and economic phenomenon is related to the calming of the political situation in the first half of the 19th century after the Napoleonic wars, and to the modernization of transport equipment, primarily railroads, which facilitated long-distance travelling. The expansion of tourism and its mass character allowed a creation of the famous rivieras, wintering-balneological and especially climatic health resorts and spas.
Due to its favourable and healthy climate and interesting history, Istria has been attractive to the clientele from the continental parts of Europe ever since the beginning of modern tourism. After 1844, when the Austrian Lloyd established permanent tourist line Trieste-Rijeka, ships regularly sailed to Piran, Novigrad, Poreč, Rovinj and Pula. The construction of the railway line Divača-Pula with the branch line Kanfanar-Rovinj (1876) even more accelerated the development of Rovinj tourism, although then it was just about individual visits instead of organized arrivals.
The year 1888 marks the official beginning of Rovinj tourism when the health resort Maria Theresia Seehospiz, provided for the treatment of poor children suffering from scrofulosis and rickets opened its doors. This health resort was mostly visited by the children from the Austro-Hungarian Empire, but also from Germany, Russia and other countries. The first meteorological measurements of air temperature started, as part of this health resort, which were compared with the Viennese values.
In 1890 Knight Georg Hütterott, an entrepreneur from Trieste, enchanted by the Rovinj archipelago, bought four islands in its southern part (St. Andrew, Maškin, Šturag and St. John), and in the coming years started to buy private properties, south of the town in the area of Punta Corrente, Montauro, Škarabe, Monvi and Monte Mulini. In the fenced area of almost 90 ha of pastures, vineyards and olive groves, he created a true nature park by afforestation of carefully selected Mediterranean and exotic plants.
Since the purchase of the islands distinguished guests visited his property, as evidenced by the list in the memorial book Cissa Insel and the stone inscriptions along the trails on the island carved in the living limestone walls. In the list of the memorial books until 1908 are mentioned Prince and Princess Coburg Gotha, Princess Stefanie von Habsburg, Archduke Ludwig Salvatore, Grand Duchess Maria Josef of Saxony, Princess Maria Theresa of Bavaria, Prince Hohenlohe with his family, Prince Johann Lichtenstein, and many other members of the European nobility; a number of admirals and officers of the Austro-Hungarian navy from Pula such as Maximilian von Sterneck, Hermann von Spaun, Rudolf Montecuccioli, Franz von Minutillo; entrepreneurs such as Arthur Krupp, Carl Escher, Paul Schoeller, E. Skoda; scientists such as R. Virchow, R. Burkhardt and others. In 1910 the island was visited by the Crown Prince Francis Ferdinand, whose visit is described in a letter to a guard of the property. Guests visited more often and stayed for longer periods of time on the island, and as a result the excursion tourism rapidly evolved into the stationary tourism.
Due to the significant commercial success, the Emperor Franz Joseph in 1898 awarded Georg Hütterott the title of knight for his merits in the industry, and in 1905 he became a member of the Senate of the Imperial Council, by which the reputation of his family reached its peak. As a young and successful merchant, due to his merits in 1879 he became the first Japanese consul in Europe. As an admirer of space and the sea, Georg Hütterott owned yacht named Tornato, and in 1894 he purchased steam schooner, yacht "Suzume" (Japanese = sparrow), and together with the Archduke Charles Stephen became the forerunner of the sport sailing in this region.
Overwhelmed with the ecstatic beauty of this area, and well aware of the remarkable success of some tourist resorts in the Adriatic, especially Opatija and Brioni, he began planning the creation of a real tourist destination.
In a brochure issued in 1908, he exposed his idea of a building of climatic health resort modelled on similar facilities along the Istrian coast. He founded a company with limited liability, which was supposed to take care of financing of the construction. The project included the area of Monte Mulini, Montauro and Punta Corrente, where the trails, tree-lined avenues, meadows and parks were already constructed. In addition, the property was surrounded by a two-meter stone wall, 900 m long, which stretched from the iron gate of the park to the sea on Škaraba. He planned to build sports facilities, 3 hotels, and swimming area at the old beach Brunetti in the Lone bay. The first hotel was envisaged on the last bend in the road that leads to the park, while the second was to be located in the park at the intersection of roads to Punta Corrente and Montauro. The third, however, was supposed to be constructed at the Punta by the sea. A number of villas were expected to follow the main road.
About the feasibility of a such project testifies a bid for the purchase of a parcel of land worth a million crowns, which in that same year, i.e. in 1908, Georg Hütterott immediately refused, and in 1918 for the purchase was even interested the Mayor of Vienna, Dr. Weisskirchner, in behalf of the City, driven exactly by a "little red book", as this project was named by Marie Hütterott. And this offer, after several negotiations, was declined.
The untimely death of Georg Hütterott in 1910 stopped most of the construction works, but the project stimulated thinking and gave impetus to the development of tourism in a true sense when in 1911 the Statute of the consortium of innkeepers, owners of coffee shops, liquor dealers and hoteliers (Consorzio dei trattori, osti caffetieri, liquoristi ed albergatori) was adopted. By seeking help of the widow Hütterott in 1913 hotel "Adriatico" was opened and the foundations of a modern tourism were laid.