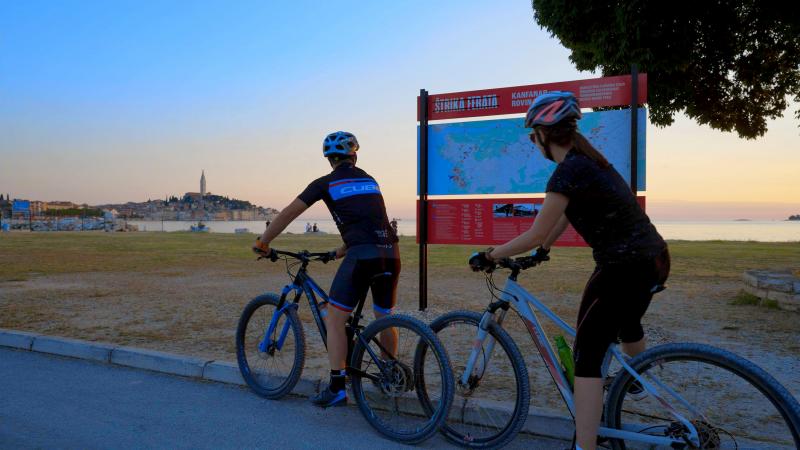 The route of the bicycle-pedestrian path Štrika-Ferata stretches along the former railway branch Kanfanar - Rovinj. The Kanfanar-Rovinj railway line stretched for 20,561 m and served to connect the economic centres of the Austro-Hungarian Monarchy with the town of Rovinj, then a strong industrial centre. The traffic was opened on 20 September 1876 and was closed 20 October 1966. The route of the former railway is located in the area of the town of Rovinj and the municipality of Kanfanar and passes through the cadastral municipalities of Rovinj, Rovinjsko Selo, Sošići and Kanfanar. Along the route, which passes over three bridges, there are also four railway stations and 14 guardhouses. Today, the route of the Rovinj-Kanfanar railway has been turned into a bicycle/pedestrian path.

The area of the track from Rovinj to Rovinjsko Selo (the Basìlica valley) is one of the larger and more significant agricultural complexes in the Rovinj area, with vineyards, olive groves, orchards (especially figs, cherries, pears, quinces, gooseberries, peaches, almonds, hazelnuts, walnuts, etc.) and other agricultural cultures typical of the region. Some of the nearby hills abound in high Mediterranean macchia, prehistoric forts and interesting historic archaeological sights.

Mondelàco quarry is situated on the slope of the hill bearing the same name. It was one of the numerous Rovinj quarries that were opened along the coast and in the inland during the Roman period, and especially during the time of the Venetian Republic. The excavation and processing of stone used to be the main economic activities in Rovinj. Different types of stone were excavated but mainly the Istrian Biancone (a type of Teutonic limestone from Upper Jurassic Period) that was used to build numerous buildings, waterfronts, churches, bridges and other structures in Venice and some other towns in the Veneto, Romagna and Marche regions. The toponym Mondelàco denotes that a water-filled depression (italian dialect: làco) used to be situated in its vicinity. In the past, such depressions were quite numerous and characteristic of the Rovinj field landscape.

Lim canal is a marine reserve and has the status of a protected landscape. The canal is a 12-km-long bay, wide about 600 m at its entrance, and deep about 33 m. The diversity of the deciduous vegetation on the southern banks and the evergreen vegetation on the northern banks of the bay is a unique and rare ecological occurrence. Nearby the track there is a natural view spot found at 80 m a.s.l. towers over the part of the southern shore of the Lim Canal.

Among the most beautiful landscapes of western Istria is most assuredly the park ‘Zlatni rt’ which protects Rovinj and its harbour from the south, and extends along the picturesque bays Lone and Škaraba, and Montauro and Punta Corrente capes. In 1890 the Trieste entrepreneur Georg Hütterott (Trieste, 1852 – 1910) bought plots in the bays Lone, and on Montravo and Punta Corrente capes, thus starting the slow transformation of that part of the landscape into a beautiful forest park. Georg Hütterott began the process of afforestation, which resulted in a forest rich in botanical species, as well as many tree-lined paths, promenades, trails and meadows. Pine trees, cypresses and laurel trees are the most common tree types in the park. Many exotic plants (such as the Lebanese cedar, Douglas fir, Ginkgo biloba, eucalyptus, etc.) were given to Georg Hütterott as a gift, or were brought by him from his travels. Years of care, even after his death in 1910, have transformed this area into a unique and rich natural arboretum. It was designated a protected area in 1948, and a forest park in 1961, and still has that status today.

A pond near the village of Maružini, previously used to water livestock, that has kept its importance today as a water source for wildlife. Ranjevac Pond retains water almost throughout the entire year, drying out only during a more severe drought.

Križmanka Pond is filled with water throughout the year due to a small underground spring in its centre. In the past, locals brought their cattle to graze in its vicinity, and the pond was of great importance as a source for watering animals, above all sheep, donkeys and Istrian cattle, an indigenous breed of Istria.

Today it is an example of industrial/railroad archaeology. To be more precise, along several long sections of the Rovinj part of the track, such as the one that crossed the “first and second bridge”, a relatively well-filled layer of crushed stone, a railroad tie and rails have been preserved, bearing witness to this high-value product of Austrian railroad civil engineering.

Church of St. Thomas the Apostle

Situated at the foot of the hill bearing the same name, this church is one of the most significant Istrian field churches. We are speaking about a pre-Romanic building from 8 - 9 century. The original building had a cross-shaped ground plan with three protruding apses covered with limestone plates (locally: škrilje). There was a rectangular structure over the central section. The bell-tower of the church is exceptionally rare, annexed during the medieval period alongside the northern wall.

Buildings of the Former Train Station

The former train station and its facilities are located in Valdibora Bay, to the north of the town. They were built from 1873 to 1876, when the line extension Kanfanar-Rovinj was constructed. The first train arrived to Rovinj on August 19, 1876. The line extension was closed first in 1966, followed by closing of the entire train station.

This Venetian Baroque building and the largest monument in the city was restored between 1725 and 1736. The outside length of the church is 51.11 m and its width is 30.26 m. The central nave is 17.71 m high, whereas the other two are 10.11 m high. At the site where this impressive church stands today, the Chapel of St. George had been located until the 10th century. St. George remained the co-patron of the parish. His statue decorates the main altar of the parish church. When in the year 800 the sarcophagus containing the body of the Christian martyr Euphemia was brought into the city, the citizens of the surrounding settlements came to visit the tomb of St. Euphemia. Church of St. George became too small and at the beginning of the X.st. began to build a new church. Around the year 950 the new three-nave basilica with three semicircular convex apses was finished. In the middle is a sarcophagus with the body of a martyr, and St. Euphemia together with St. George became the patroness of the city.

In ports of this area, protected from the winds, numerous Rovinj batanas are berthed even today. Rovinj batanas are flat-bottomed wooden boats This is the reason why the Batana House Eco Museum was established. This is a dynamic project that offers, besides a permanent exhibition of batanas and fishing tools, various events that ensure a unique experience of combining tradition and contemporary life, past and present, and the story about an ancient wooden vessel that still remains a part of Rovinj's everyday life. The Batana Eco-museum is listed on UNESCO’s list of best practices for the preservation of intangible cultural heritage. Rovinj – Rovigno Museum It is located in a Baroque palace of the counts of Califfi from the 17th/18th century. It was established in 1954 at the initiative of Rovinj fine artists. Their idea was to establish a place where cultural wealth could be stored, as well as a place where numerous exhibition activities could be held.

Dvigrad is the most representative medieval monument in the municipality of Kanfanar, an old municipal centre abandoned due to plague and then malaria in the 17th century. These are the ruins of a medieval city in which you can still see the remains of a once rich and very busy city, inhabited by over 1,500 inhabitants in several hundred buildings. The site is dominated by the ruins of the Basilica of St. Sophia on the main town square, where numerous cultural and musical events take place throughout the year.

The station was constructed in 1896 and became an important railway hub. Kanfanar was for a long time, with its railway branch to Rovinj, the main station towards the west coast of Istria. The station building in Kanfanar is one of the most beautiful on that railroad and still impresses today with its beauty and distinctive style.

Near the village of Sošići, on the road to Rovinj, there is a hill called Maklavun. The eponymous Bronze Age tumulus believed to be 3,500 to 4,000 years old is located on its top. The site is similar to the structures of ancient Mycenae, and, besides a funeral chamber (tholos), has an entrance hall (dromos) as well. It is also believed this was the first solar observatory on Croatian soil because the orientation of the dromos overlooks the winter solstice.

The current building of the Church of St. Sylvester was erected in 1695 on the foundations of an older and smaller church from the 13th century. Twenty three tombs were found in the church, the oldest of which dates from 1714, and the most recent from 1802. It has three altars, of which the largest one is the altar of St. Mary of the Rosary. Also worth mentioning are the restored organ, the Gothic pulpit brought from Dvigrad, and a copy of the Shroud of Turin.

The Church of St. Valentine is a votive church built by the canon Bartolomeus Francaz in the middle of the first half of the 18th century, opposite his house in Kanfanar. His reason for the construction of the church is inscribed on a plaque (to the right of the entrance). The writing in Latin declares it was built ‘owing to the great grace he received from God to the glory and praise of St. Valentine he had sought solace in’. Today it serves mass on the feast of St. Valentine, and on Palm Sunday a procession starts from here towards the parish church.

The Istrian Ox Park was opened on the occasion of the 30th festival of Jakovlje and its cattle show. It is the first site in Istria to be thematically dedicated to boškarin, the indigenous cattle breed. The park is located on the premises of ​​the fairgrounds – the area where fairs were held and cattle was traded since ancient times, and where the current shows of Istrian cattle have been held all these years. In addition to attractive permanent exhibits, such as antique hay and straw stacks, hay sheds (trtoja) and other entertainment and educational activities, the Park also shows all stages of growth of Istrian cattle, from the calf phase weighing 30 kg to the ox phase weighing over a ton, with the help of interesting silhouettes along the edge of the Park and the main Kanfanar road.