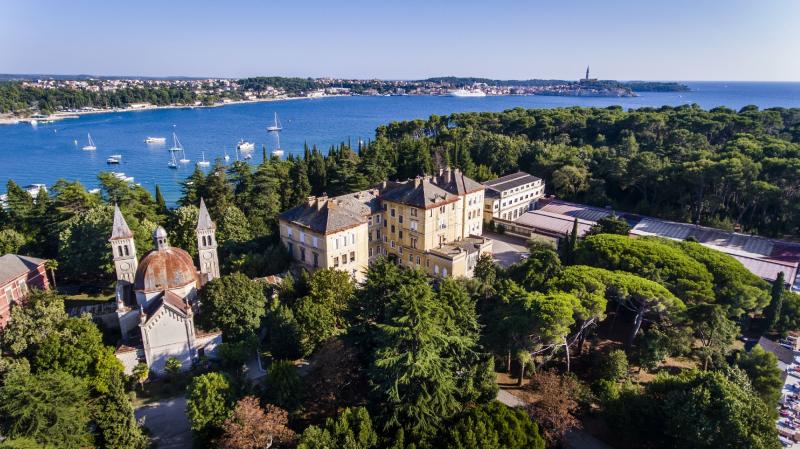 Rovinj is the ideal destination for an active holiday, healthcare and relaxation. Thanks to the mild Mediterranean climate, numerous parks, beaches, as well as walking and bike trails, Rovinj is the perfect choice for mental and physical care and relaxation. The protected “Zlatni rt” forest park, extending over 54 hectares and situated in the immediate vicinity of hotels and the city centre, allows fans of cycling, jogging, climbing and taking long walks to spend their time in an oasis of lush vegetation and enjoy the pleasant climate, as well as the scents of the surrounding forest, meadows and sea.

The tradition of the Special Hospital for Orthopedics and Rehabilitation "Martin Horvat" Rovinj-Rovigno goes back to the Austro-Hungarian period. Owing to the beneficial Mediterranean climate and its location on the peninsula of St Pelagius, the hospital had been an attractive coastal health resort for the treatment of bone diseases of the then European aristocracy right from its founding.
The hospital complex was built under the patronage of Maria Theresa and inaugurated in her presence on 22 May 1888. The hospital’s opening was supported by Vienna-based doctors, particularly by prof. Luigi Monti, the first hospital director.
The hospital’s reputation as a health resort, as well as an ideal place for spending a holiday and undergoing orthopaedic rehabilitation, lasted for a century, and it ensured the loyalty of Austrian patients who gladly used the hospital services, mainly under long-term contracts with the AUVA Austrian insurance company. The Department of Surgery was active until the 1990s. Today, hospital treatment is based on physical medicine and rehabilitation with patients staying on either full or half board. Treatment in the hospital encompasses various types of physical therapy and rehabilitation, i.e. kinesiotherapy, hydrotherapy and electrotherapy in combination with beneficial properties of the surrounding nature (helio- and thalassotherapy).
The first therapeutic beach suitable for persons with health difficulties was opened in June 2017.

The clinic is open from May through October.

Over the past years, dentistry has become a thriving branch of medical tourism. Rovinj prides itself on having numerous world-renowned dental practices with 15 private dental clinics offering a wide range of top first-rate services ranging from implantology and prosthetics to periodontics and orthodontics. Some dental clinics also offer minor cosmetic procedures.
For more information, check here.

Enjoy practicing Tai chi chuan (Chen style) and Chi kung (energy exercises) in the magical Golden Cape Forest Park near the cedar star, surrounded by monumental, hundred-year-old Himalayan cedars, and with the instruction of an Anan-Do leader and a licensed Tai chi chuan trainer at the Olympic Croatia academy and the Croatian Wushu Association, Dino Sošić, who has been practicing tai chi chuan and chi kung for twenty years. Tai chi chuan is a physical, mental, meditative and therapeutic discipline based on the principles of Tai chi (Yin and Yang), and finds its roots in traditional Chinese exercise and martial arts, traditional Chinese medicine and philosophy. These are therapeutic exercises that consist of slow, continuous, circular (rounded), fluid and graceful movements in an upright position and movement. Practicing Tai Chi does not require special clothes, mats or props and can be practiced by all age groups...

In addition to being fun, practicing Tai chi chuan and Chi kung is also very useful: with regular practice, it has been proven that we directly improve movement coordination, maintaining balance, harmonizing the activities of the left and right hemispheres of the brain, regulation of metabolism, bone cell density, joint and spine mobility, elasticity of tendons and muscles, and we naturally deepen our breathing. It also has a positive effect on a number of physiological processes in the body: blood and energy circulation, blood pressure, blood sugar level, nervous system, organs with internal excretion and generally raising the body's immunity and better coping with stress (health-therapeutic prevention).

Experience stunning moments in nature and relax in a pleasant landscape in the company of Siglavy and Conversano horses. Learn more about horses, their positive energy, their amazing behavior, their needs and their way of communicating. Befriend the therapy horses, touch them, groom them, play or walk with them, or simply watch them and sit close to them.