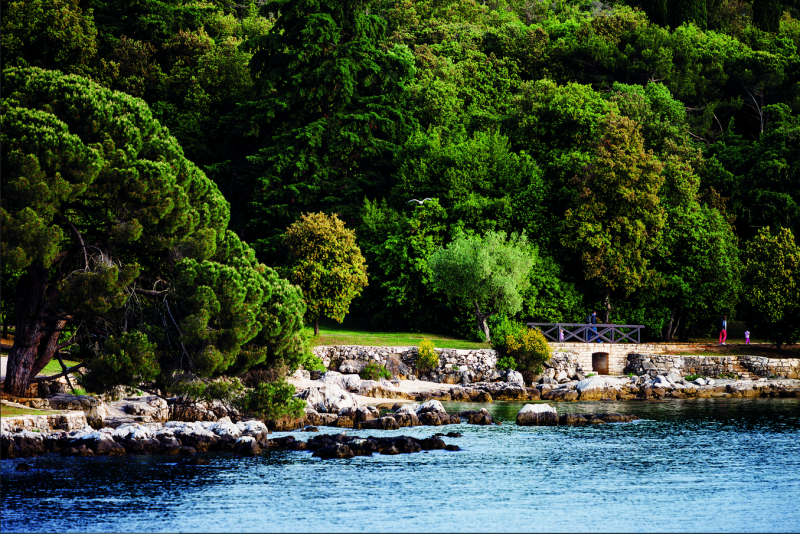 Among the most beautiful landscapes of western Istria is most assuredly the park ‘Zlatni rt’ which protects Rovinj and its harbour from the south, and extends along the picturesque bays Lone and Škaraba, and Montauro and Punta Corrente capes. In 1890 the Trieste entrepreneur Georg Hütterott (Trieste, 1852 – 1910) bought plots in the bays Lone, and on Montravo and Punta Corrente capes, thus starting the slow transformation of that part of the landscape into a beautiful forest park. Georg Hütterott began the process of afforestation, which resulted in a forest rich in botanical species, as well as many tree-lined paths, promenades, trails and meadows. Pine trees, cypresses and laurel trees are the most common tree types in the park. Many exotic plants (such as the Lebanese cedar, Douglas fir, Ginkgo biloba, eucalyptus, etc.) were given to Georg Hütterott as a gift, or were brought by him from his travels.

In front of the Punta Corrente Meadow, tall and beautiful Himalayan cedars are arranged in a six-pointed star. Hütterott must have had in his mind the uniqueness of parks of his time, especially the English landscape parks, when he planted the trees in this singular figure. Furthermore, according to the brochure Klimatischer Kurort Cap Aureo bei Rovigno – Istrien. Ein Projekt published in 1908, Hütterott intended to transform ‘Cap Aureo’ and what he called the ‘coast of the sun’ into a health resort that was supposed to become one of the most important tourism destinations in this part of the world. Years of care, even after his death in 1910, have transformed this area into a unique and rich natural arboretum. It was designated a protected area in 1948, and a forest park in 1961, and still has that status today.