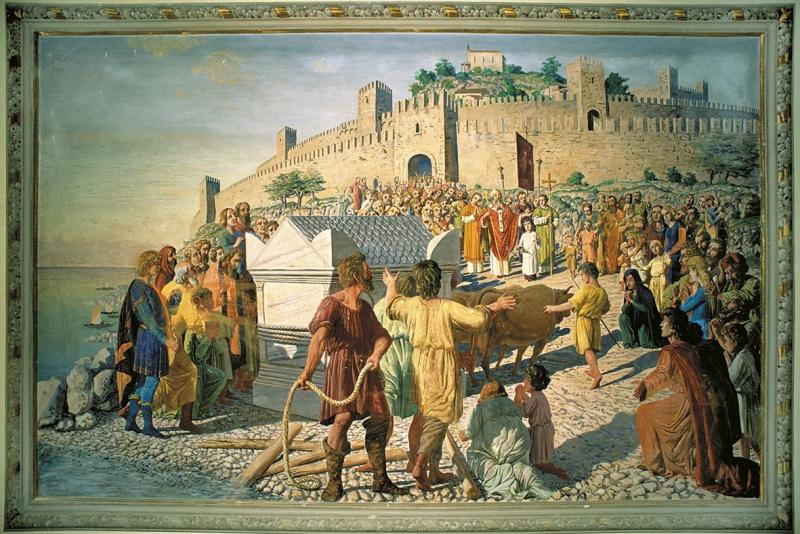 In the year 800, the church bells began to ring excitedly in the early morning. The residents all flocked down to the sea. A marble sarcophagus floated in like a stone ship. The awestruck residents of Rovinj tried to pull the stone tomb into town by using horse and ox carriages, but in vain. Neither the strong muscles nor the human wit helped – it took an act of God.
The saint only presented herself to a small boy and said: „I am Euphemia of Chalcedon and I have engaged Jesus with by blood. You will take out the stone ark with your body“. And indeed, the boy harnessed his week calves before the amazed crowd and pulled the sarcophagus up to the church on the top of the town hill. They opened it there and saw the motionless body of a beautiful girl. Next to her was a scroll of parchment paper with these words written on it: Hoc est corpus Euphemiae Sancte!
This is the body of Saint Euphemia, a virgin martyr of Chalcedon born for the heaven on 16 September of the year of our Lord 304. Amazingly, every story about Rovinj still begins with the tale of St. Euphemia, over 1200 years after its creation. Not only is the martyr of Chalcedon still a celebrated guardian of the town, but the legend of St. Euphemia is associated with the search for hidden meaning of the beginning of tourism in Rovinj. As it happens, on her day, 16 September, Rovinj has always become the greatest meeting point of Istria.