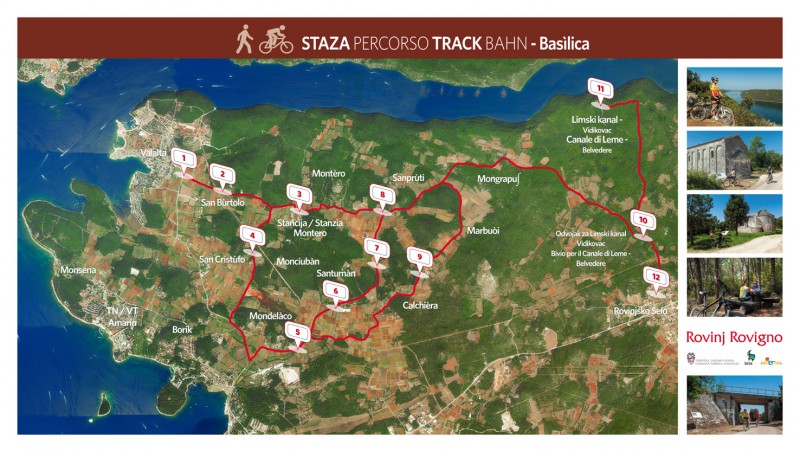 The spacious Basìlica valley stretches southwards from the first section of this path. Local legend says that it was named so because part of the land of that spacious valley was owned by the Rovinj Church of St. Anthony of Padua, thanks to a donation by the family of Domenico Lorenzetto. His wife was allegedly cured after visiting the Paduan Basilica of St. Anthony. For that reason, the married couple later built a “basilica” in Rovinj, i.e. the mentioned Church of St. Anthony of Padua (situated in the square bearing the same name in front of the present-day “Calisona” Restaurant; the church was torn down in 1933). The agricultural estates found in the northern part of the rural area of Rovinj were therefore called 'the basilica estates'.

The church is situated in the northern rural area of Rovinj, on the edge of a fertile valley, at the foot of the hill bearing the same name. It is one of the larger one-nave Romanic field churches in Rovinj. The interior of the church is distinguished by a wooden transenna horizontally dividing the section for women and the section for men. The altar painting presented St. Bartholomew, the titular of the altar and the church, as well as St. George and St. Euphemia, the patron saints of Rovinj.

This agro-tourist estate is situated in a rural homestead (locally: stancija) bearing the same name, in a lowland area between the Monciubàn hill in the south and the Montèro hill in the north.

This church in one of the more significant Romanic one-nave field churches in Istria not only due to its location on the edge of the fertile Basilìca valley (top.) on a slightly elevated terrain (the church lies on a live rock) with a view towards south stretching to the church and the bell-tower of St. Euphemia, but also due to its distinct lateral façades enlivened by the motif of lesenes ending with blind arches (6). The small protruding apse is covered with limestone plates (locally: škrilje). Along with the images of St. Francis of Assisi and St. Elijah the Prophet, the altar painting also presented St. Christopher the Titular. Until 1869, the church portal included an architrave with two lions and four animal heads on a rustic bas relief. The church was desecrated a long time ago and last restored in 2000.

We are in front of the so-called First Tumbìn (top.), the overpass of the old Kanfanar-Rovinj railroad track (section of the Trieste – Pula track) completed in 1876. The track has not been used since 1966. Today it is an example of industrial/railroad archaeology. To be more precise, along several long sections of the Rovinj part of the mentioned track, such as the one that crossed the “first tumbìn”, a relatively well-filled layer of crushed stone, a railroad tie and rails have been preserved, bearing witness to this high-value product of Austrian railroad civil engineering.

Situated at the foot of the hill bearing the same name, this church is one of the most significant Istrian field churches. We are speaking about a pre-Romanic building from 8 - 9 century. The original building had a cross-shaped ground plan with three protruding apses covered with limestone plates (locally: škrilje). The mere crossing was elevated and connected with its lateral arms by way of openings of the semicircular arches. There was a rectangular structure over the central section. The bell-tower of the church is exceptionally rare, annexed during the medieval period alongside the northern wall. During the 16th century, the church was reduced to a one-nave space and cut short on its western side. The excavations disclosed the original paving of the northern arm of the crossing and several fragments of the window transenna and the altar partition (pluteuses, beams and capitals). The altar painting presented the resurrected Redeemer and St. Thomas.

We are in front of the so-called “Second Tumbìn” (top.), the overpass of the old Kanfanar-Rovinj railroad track (section of the Trieste – Pula track) completed in 1876. The track has not been used since 1966. Today it is an example of industrial/railroad archaeology.

It belongs to the group of smaller one-nave Early-Gothic field churches. Along with its titular, the altar painting presented numerous other saints (among which also St. George and St. Euphemia, the patron saints of Rovinj). It was abandoned at the end of the 18th century and deteriorated during the following several decades.

The “Haber” Riding Center and Geno Park has been breeding Trakehner horses and Spanish horses and ponies for over 30 years with a decade of experience. The riding school (FN – registered riding school) is run by an expert instructor (FEI – trainer).
At the farm, aside from the riding school, it is also possible to train horses for all equestrian sports categories as well as to tame wild horses and correct the behavior of traumatized horses. The school operates within the “Saint Euphemia” Equestrian Club, whose riders very successfully partake in training and hurdle competitions of the highest difficulty.  The equestrian club’s training takes place at a riding hall with special groundwork.
For riding on a terrain in nature there are a series of different trails of various lengths that are appropriate for all categories and all age groups of riders.
Along with horse breeding and the riding school at the farm, indigenous Croatian animals are also bred here with the goal of opening a Geno Park.  Istrian oxen and donkeys, the Posavina horse and indigenous dog breeds (the Tornjak and the Croatian Sheepdog) are bred on the farm as well.

This natural view spot found at 80 m asl towers over the part of the southern shore of the Lim Channel called Pònta dei Frati (top. = Friars' Cape). The beauty of the landscape surrounding the View Spot is enriched by the distinct beauty of the Lim Channel enjoying the status of a special sea reserve and a significant landscape.
We are speaking of a 12 km long sea bay that is approx. 600 m wide at its entrance and 33 m deep. Lim Channelrepresents a sunken karst valley (during the iceberg melting phases) of the former paleo river called Pazinčica, formed in Jurassic limestones, that later became an underground river (which sank in the Pazin cave), while its last part (present-day Lim Walley and Lim Channel) dried out. The name of this sea bay is ascribed to the fact that during Roman times it represented limes, i.e. the boundary between the Pula and Poreč state properties.

Rovinjsko Selo (145 m asl) is one of the communities within the town of Rovinj (only 7 km away). The surrounding area was inhabited during the pre-historic and Roman times and hence abounds in archaeological sites (forts; rustic villas). Rovinjsko selo was established in 1526 by Dalmatian immigrants (from the surroundings of Zadar), who were fleeing from the Turks, with consent of both Venetian and Rovinj authorities.
The old center of the village has been preserved (situated in the central part of the present-day village, in the Lakuverča locality). It includes interesting and distinct rural architectural elements, i.e. residential/commercial complexes with yards, built wells and terraces with staircases (locally: baladuri). The parish church (also the cemetery chapel) is dedicated to St. Anthony the Abbot. It is a one-nave building with straight back part and a baptistery.
Some of the nearby hills abound in high Mediterranean maquis, prehistoric forts and interesting historic archaeological sights.

Rovinjsko Selo fosters a rich folklore and carnival tradition, old customs and habits (associated mainly with rural civilization), as well as the “balun”, a typical Istrian dance with an interesting variant in Rovinjsko Selo. An event called “Antonja”, an exhibition of wine and olive oil, is held on St. Anthony the Abbot's Day (January 17).