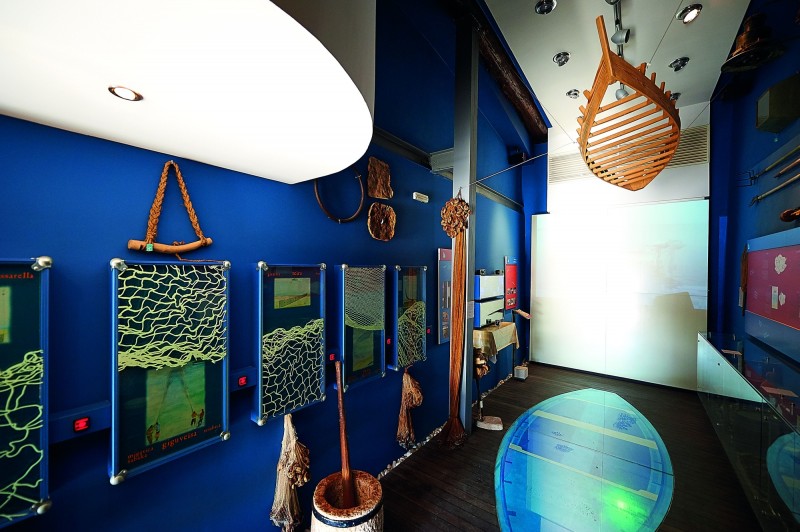 The museum was founded in 2004 under the patronage of the Town of Rovinj and is dedicated to the traditional wooden batàna vessel and the memory of the Rovinj community which has chosen it as its symbol. Batàna mirrors the continuity of the maritime heritage and the everyday life of local inhabitants. Founded on principles of knowledge, cultural dialogue, interdisciplinary approach and multimedia, the Ecomuseum values the Rovinj heritage and strengthens the identity and particularity of Rovinj as a place comfortable for living and a unique destination. The interpretation and documentary centre of the Ecomuseum (with the permanent exhibition), “the House of Batana” includes an entrance counter with a souvenir shop, three gallery spaces dedicated to batàna and a polyvalent space on the first floor. More than 90 % of the exhibited objects were donated by residents of Rovinj.

The exhibition is of a multimedia type: the short and concise accompanying texts complement the diverse visual and audio contents. A unique method of innovative new technologies was used for the purpose of documenting traditional shipbuilding skills, resulting in slide projections of the process of building a new batàna boat and the repair of the oldest batana. By using the interactive exhibits, visitors choose their own level of information and can interactively follow the conversations of the characters of the exhibition in the indigenous language of Rovinj, and listen to the sound of typical Rovinj songs, bitinàda in the background.

During the summer, the small square in front of the House of Batana becomes a place where intangible cultural heritage is celebrated, i.e. where the batàna boat is built and repaired as a House of Batana cultural and touristic attraction. The experience is further enriched with cultural programmes during which, each Wednesday and Sunday, in addition to the construction or repair of the batàna boat, visitors are offered concerts of traditional Rovinj music and local culinary specialties. Traditional launching of newly built and repaired batàna boats done from the shore itself (the Little Pier) is especially attractive.

The art of batàna building is entered into the Register of Intangible Cultural Heritage of the Republic of Croatia, while the Batana Eco-museum is listed on UNESCO’s list of best practices for the preservation of intangible cultural heritage.