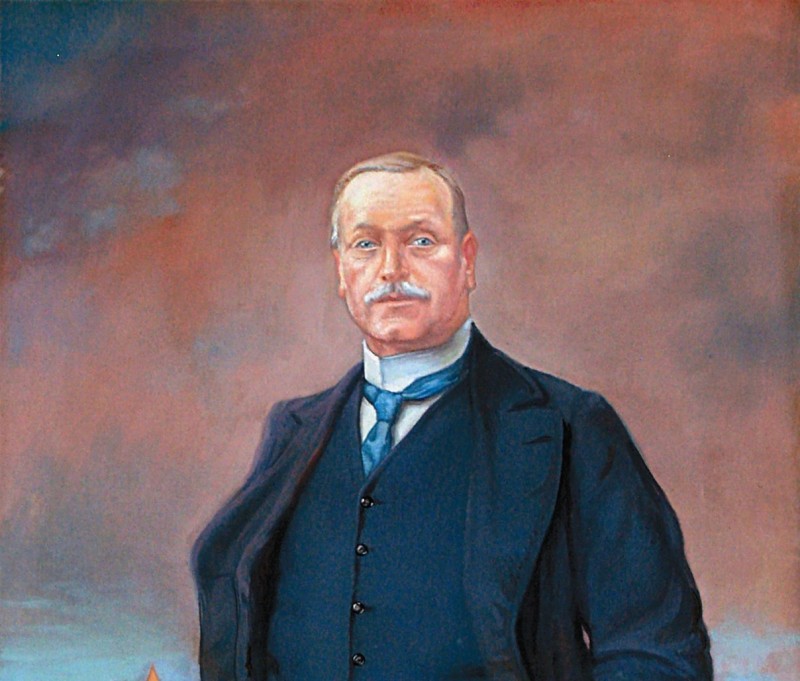 In 1890, Georg Hűtterott, a successful entrepreneur of German origin bought four islands and in the years to come added land in the broader region of the present Golden Cape - Zlatni Rt, which he slowly proceeded to enrich with both Mediterranean and exotic plant species.
In 1908, he personally published a booklet, actually a project as he referred to it, entitled ‘’Climate Resort Cap Aureo near Rovinj, Istria". After construction of a railway all the way to Pula, with an exit for Rovinj in Kanfanar, the center of the Monarchy, Vienna, was finally connected with its southern province.
Having improved the islands of St. Andrija and Maškin and received respectable guests there, Hütterott acquainted the public with his plans for Golden Cape - Zlatni Rt. A mere glance at the map within the Project revealed his ambitious plan to build hotels, villas and bathing resorts in the area already provided with pathways, tree lines and landscaped meadows. The modern climate resort was to provide first-class accommodation in a heavenly part forest. The small red visionary booklet raised the value of the land previously purchased in Zlatni Rt, offers began to come in, but Hütterott did not even consider selling. In 1910, only two years after the booklet was published, the premature death of Georg Hütterott forever erased the vision of Zlatni Rt as it was intended to be. Only a part of the landscaped area was implemented and we can leave project completion to our imagination. After careful consideration, the project being implemented to a minor extent is actually a better outcome because an undeveloped oasis of quiet was inherited almost in the town center. In these times of excessive construction, this oasis is priceless and has every right to be referred to as the Golden Cape – Zlatni rt.

A passage of the booklet ‘’Climate Resort Cap Aureo near Rovinj, Istria":
„Intentions are, given the favourable advantages of Rovinj, to build a health resort. Thereby, more than 100 acres large peninsula that extends south of Rovinj in the southwest direction, fan-shaped "Cap Aureo" on a specially protected position, which stretches along the sea, was taken into account (see plan 1).
The owner of this peninsula over the past 15 years, with that intention and always keeping that in mind, built roads and trails based on unique plan; he deliberately planted it and created the nature park of this peninsula. Evergreen groves, beautiful fresh meadows, paths and coastal roads and alleys provide pleasant walks and lead to beautiful lookouts, and the sea is everywhere at hand. From the town to the peninsula "Cap Aureo" there is about 20 minute walking. From the train station through the town one does not travel much longer, always by the sea, using nice road with beautiful views. In front of the peninsula there is a small group of Cissa-islands, which is also privately owned. The outermost and most picturesque island among them is the "San Giovanni in Pelago," characterised by the lush vegetation, rocks of grotesque shapes and beautiful views, and with a small church with a thin tower. On the seaward side is located the cliff "San Giovanni in Pelago" - St. John at sea, on which there is farthest lighthouse on the west coast of Istria.
Among the three isthmuses on the peninsula, the one closest to the town, forms a rocky hill with an old quarry, from where in times past Rome and Venice were supplied by the stone for the construction of their palaces. The rocky promontory, "Monte Aureo", popularly shortened to "Montauro", is the "Golden Hill", which is often alight as it is pored over with gold, while the sun that sets into the sea gives it its last rays. This isthmus has been named after the "Monte Aureo", but also a small peninsula "Cap Aureo".
The health resort is not luxuriously designed. Buildings should be designed according to the modern standards of hygiene, airy and bright, and simple, but impressively equipped. This health resort is not intended for the sick and people with disabilities. But those seeking peace and relaxation, away from the city bustle, from the professional and social life will happily and with confident success come to "Cap Aureo", on the sunny coast of Istria, to the "COSTA DEL SOLE".”