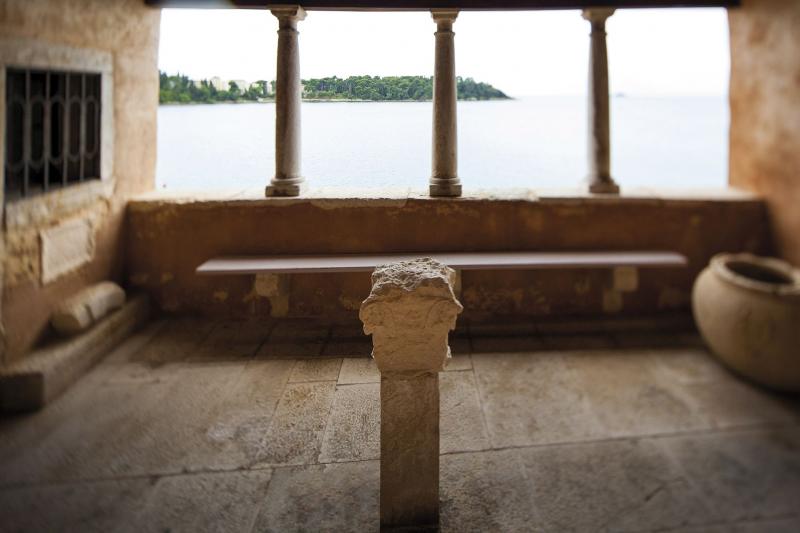 Church of Our Mother of Mercy
It is located in Carducci Street. The exact date of its construction is unknown, however it is known that it was consecrated in 1487. Based on the inscription ‘Scip. Benz. P. 1584.’, i.e. Scipione Benzon Podesta 1584 that includes a nobility coat of arms, we can conclude that it was restored in 1584. The church contains valuable carved wooden benches made in the Late Baroque style and numerous votive gifts hanging on the walls of the church, bearing significance to the history of maritime activity in Rovinj. According to the tombstone on the floor, Countess Elisabetta Angelini-Califfi, known as 'the mother of the poor', was buried in this church on December 13, 1762.

Church of St. Benedict
This small church is located at a small square surrounded by high buildings. This square and the street bear the same name Pod lukovima. The Gate of St. Benedict, known today as Vrata na obali, is located close by. The church was built in the 14th century and the monks from the monastery situated on St. Catherine's Island (Otok Sv. Katarine) came to serve in this church. The holy mass is held once a year, on the occasion of St. Benedict's Day.

Church of the Holy Cross
This small church from the 14th century is located in Holy Cross Street, close to the Gate of the Holy Cross (Vrata Sv. Križa). The year 1592 is inscribed on the doorpost of the entrance door because that is when the porch was raised and the facade put up. The legend says that the sarcophagus in which the remains of St. Euphemia were carried had rested there for a while. The inscription written on the pole at the foot of the church, set up on a rock by the sea, bears witness thereto.

Chapel of St. Thomas the Apostle
The Chapel of St. Thomas the Apostle is a wonderful monument of medieval architecture. It was mentioned in the 14th century and expanded in 1723 – the street area with a fresco displaying the crucifix was roofed. Built in 1388, this is a very interesting building: the entrance is accessible by stairs, it was partially built in the same arch/gate and it has a small bell tower on the top. It belonged to the Fraternity of St. Francis.

Church of St. Bartholomew
It is located by the edge of a plain beneath Valalta Bay. These are the remains of a Romanesque church missing the façade and the roof.

Church of St. Christopher
It is situated one kilometer east of Valalta at the edge of a fertile plain called Bazilika. This is parallelogrammic building with a semicircular protruding apside that is somewhat narrower than the central nave. The exterior side of the walls contains shallow column parts conencted with arches on the upper side. The walls were built quite rustically, which indicates they were made by an unskilled builder, and plastered inside and outside. The roof of the church consists of a wooden structure covered by channels, while the roof of the apside is covered by slate. According to the styling characteristics, it dates back to the Romanesque era.

Church of St. Thomas
It is located 4 km from Rovinj, right next to the old Rovinj-Kanfanar railroad. The layout is the shape of a cross, with subsequently added bell tower on the north side. In the 16th century, radical construction works were performed in the church, completely changing its original form. The lateral arches were closed off so it became a single-nave building. The west part of the building was significantly shortened and a new façade with two rectangular windows was built. During the most recent research, they found some ten fragments of pre-Romanesque architectural plastic and parts of church furniture – fragments of transoms, parapets, altar divider pilasters, columns with capitals… Based on the previoius knowledge about the church, it was probably built in the late 8th or early 9th century. The Church of St. Thomas is a nice example of sacral architecture during the Carolinian era in Istria.

Church of St. Damien
This small church is halfway between Palud Wetlands and St. Damien’s Cape. It was largely devastated so it now looks like a parallelogrammic building with no roof and facade. According to its styling characteristics, it was created between the 11th and 12th centuries, during the Romanesque era.